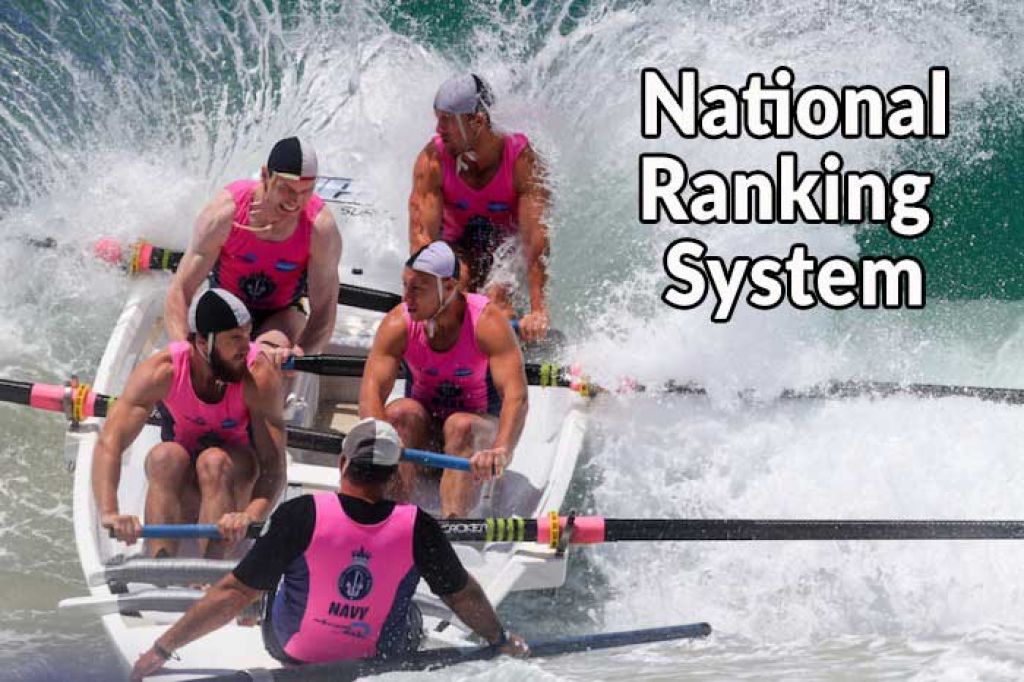 The following is a summary of the key issues for the introduction of a National Ranking System for Surf Boats in Australia.

Purpose
To find the overall best men's and women's crews over the season and provide a ranking for other crews.

How will it work?
Each crews best 3 scores over 12 months are added together to get total points regardless of how many rankings events entered. The points for an event drop off when the event is run the next year to give a current ranking at any point in time.

To start off, all open men's and women's crews will be given an opening ranking at the beginning of the season based on their finishing positions at the previous seasons Aussies and ASRL Open. (See opening rankings tables)

The men's and women's rankings leaders at the conclusion of Aussies will be declared the overall champion crews for the season and awarded perpetual trophies.

In the event of crews having equal points, the crew with the better result at Aussies will receive the higher ranking.

Which divisions ?
Opens only in the first year to add some prestige to opens and keep it manageable.
The approach for later years will be reviewed at end of the season.

It is impossible to perfectly allow for the variations in sizes of events, quality of fields, and geographical distribution while also keeping it simple.

We have back tested many systems to try and find a fair way to allocate points in a simple fair way. In the first season, we will allocate points based on the number of top 20 ranked crews in an event based on the current rankings at the time it is run. e.g. An event with 18 of the top 20 ranked crews will be harder to win than an event with 5 of the top 20 crews, so more points are allocated to that event. It may not be perfect but we can review it and refine it after the first season.

Which events have rankings points and how many?
In the first season, we will keep it to the more competitive events and review including other smaller local events after the first season. (see draft calendar )

Subject to agreement by SLSA and event organisers, it is envisaged that the rankings leaders will wear the yellow rashies in subsequent competitions.

Sponsorship
It is expected that both the rankings website, and yellow rashies will provide sponsorship opportunities.

Strengths and Weaknesses
It is expected that this system will work well identifying the overall winners as all crews have equal access to the national events e.g. Aussies, ASRL Open, NTSE, OT.

However, due to the wide variation in the size and quality of events between states, it is not expected to be perfect at ranking lower level crews between states. e.g. is a 43rd ranked crew in SA really better than a 47th ranked crew in NSW? Some states will have access to more, higher ranking events e.g NSW, than other states e.g. Tas/SA. It is expected to provide a reliable ranking between crews in the same state as they will have equal access to the same events.

We ask you to be patient and supportive while we learn in the first season and we expect this to be a worthwhile exercise in the longer term.