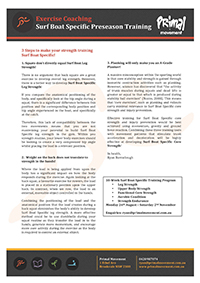 There is no argument that back squats are a great exercise to develop overall leg strength. However, there is a better way to develop Surf Boat Specific Leg Strength!

Therefore, this lack of compatibility between the two movements means that you are not maximizing your potential to build Surf Boat Specific leg strength in the gym. Within you strength routine, your lower body exercises should be looking to create a very compressed hip angle whilst placing the load in a relevant position.

2. Weight on the back does not translate to strength in the hands!

Where the load is being applied from upon the body has a significant impact on how the body responds during the exercise. Again looking at the back squat, a favourite exercise for rowers, the load is placed in a stationary position upon the upper back. In contrast, when we row, the load is an external, moveable object controlled in the hands.

Combining the positioning of the load and the anatomical position that the load creates during a back squat diminishes the body's ability to develop Surf Boat Specific leg strength. A more effective method could be to use dumbbells during your squat routine as they transfer the load in to the hands, generate more momentum, and encourage more core activity during the exercise as the body is required to control an external object.

3. Planking will only make you an A-Grade Planker!

A massive misconception within the sporting world is that core stability and strength is gained through isometric contraction activities such as planking. However, science has discovered that "the activity of trunk muscles during squats and dead lifts is greater or equal to that which is produced during stability ball exercises" (Nuzzo, 2008). This means that 'core exercises', such as planking and rollouts carry minimal relevance to Surf Boat Specific core strength and injury prevention.

This article gratefully provided by Ryan Barraclough of Primal Movement