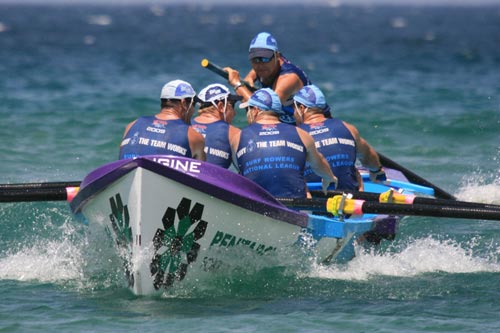 Victoria’s Jan Juc crew has been crowned 2009 ASRL Open Champions after winning the Open Men’s race at the Navy Australian Surf Rowers League Open by a hair at Broulee Beach on Sunday, 8 February, 2009.

Little separated the crews as they turned the cans and with flat surf, the race became a true test of skill and stamina.

All 6 crews crossed the line within inches of each other and the outcome of the race wasn’t known for some time as the judges deliberated on the winner.

Eventually Jan Juc was hailed the champion ahead of Mona Vale and Manly. Austinmer, Whale Beach and Wollongong made up the minor placings but only centimetres separated the crews.

“It was a tough race, it was long and the boys put in everything they had,” said Jan Juc Sweep Scott Tannerhill.

“We weren’t too sure who won when we hit the line, but they boys raced extremely well the whole weekend and we knew were in with a strong chance”.

“It’s a real honour to win the Navy ASRL Open, you’re competing against the best of the best and we’re stoked to win.”

Local crew Batemans Bay was crowned Reserves Division Champion after a stellar performance all weekend. The crew won every race bar one throughout the two days of racing and crossed the line in the final a nose ahead of Palm Beach and Caves Beach. In another close race Bulli, Coogee and Palm Beach’s second crew hit the shore within inches of each other. South Curl Curl beat arch-rivals Mooloolaba to take out the Open Womens for the third year. The rivalry between the two crews has been strong for years. Mooloolaba took the lead heading into the can turn and looked sure to leave South Curl Curl in their wake as they soared back to shore. But a late surge by the Sydney crew saw the teams neck and neck. South Curl Curl found the extra energy to pull ahead just metres before the line to take the race.

“Over the past three years, nearly every major final we’ve been in Mooloolaba’s been there and it’s always been us and them 1st and 2nd or 2nd and 3rd, so it’s great to get another big win in,”  said South Curly Stroke Kate Mortimer. 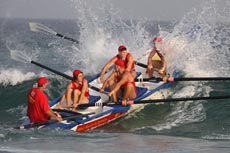 In other races Austinmer took out the Under 23 Mens, Palm Beach the Under 23s Womens and Bulli the Under 19s Mens.

A record number of crews entered into this year’s Navy ASRL Open, making it the largest Surf Boat Event in the world. More than 350 crews came from almost every state in the country to compete.

Final Results for the weekend's racing:

You can view ALL the results, including Masters by clicking here

Click here to view a selection of photos from the weekend, kindly provided by Chris "Nugman" De Jong. Or, you can view the entire series on Chris's site by clicking here Draws for the ASRL Open at Broulee, Saturday 7th February 2009, have been released.  All the draws are available for download and printing via this post on our forum here

The format will be Block Racing with Reserves and both U23's in the morning (from 8am sharp). We are looking at getting down to 8 crews in each area, but may have to run Reserves and Women early Sunday morning in the 12-8 elimination.

Again I will stipulate TIME IS THE ESSENCE and time wasting will not be tolerated. Races will come round pretty quick, so be on your toes and keep checking with the progress on the day. DO NOT LEAVE THE BEACH WITHOUT CHECKING THE RESULTS OF YOUR PREVIOUS RACE.  I have seen it happen time and time again when crews think they are dead meat yet have been saved by a DQ or some life saving miracle to progress to the next round only to not show when called.

The afternoon session is due to start at 1pm with U19s, Open Women and Open Boat. The exhausted officials will probably be off the beach about 5pm.

Due to ever changing circumstances, these draws COULD CHANGE. Check yours with the NOTICE BOARD on the day of racing, if yours is not the same tear it up. The recorder may have a spare update.

WE ARE STILL LOOKING FOR VOLUNTEERS TO GIVE A COUPLE OF HOURS (NOT ALL DAY, JUST WHAT YOU CAN) ON THE STANDS TO GIVE THE REGULARS A BREAK. IT IS A GREAT WAY TO VIEW THE RACING AND YOU BECOME QUITE INVOLVED, ESPECIALLY IN TIGHT FINISHES. YOU WILL BE WORKING WITH EXPERIENCED PERSONEL WHO JUST NEED THAT EXTRA BIT OF ASSISTANCE. THIS REQUEST IS FOR SATURDAY (BOTH AREAS) ONLY. Because of circumstances beyond our control, the Masters, big in numbers though they are will have to register on the day (Friday 6th) and we will take it from there. Those that have responded seem to favour the 180's slot.   Categories for the Masters is 140, 160, 180, 200, 220,240 male.140,160 female.  There has been a good response, although some paper has gone missing, and more are expected when that shows up. Masters have been around boats long enough to know the ropes.

Final word on the competition is that it is the PRIDE OF THE NAVY NATIONAL SERIES...YOU MUST WEAR YOUR NAVY GEAR.

Medal presentations will proceed 30 minutes after the last final..Don't appear looking like a dag.  If you don't have touring gear wear your NAVY RACING GEAR.

MAY I TAKE THIS OPPORTUNITY TO WISH ALL CREWS THE VERY BEST OF LUCK OVER THE WEEKEND..MAY HUEY SMILE ON YOU, AND MAY ALL YOUR WAVES BE WINNERS. 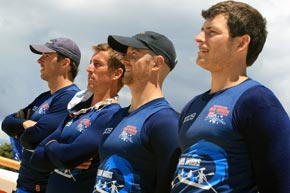 The interest in the ASRL Open at Broulee has been fantastic with 300 crews entered for Saturday.  With the Masters event on Friday, the figures are well into the high 340’s and because of the highly successful Navy National series, clubs from the West, South, and Tasmania are attending for their first time. Just like when the rowing bug bites you, it will not be their last.

Although most surfboat personnel hold degrees in higher mathematics, it is not difficult for mere mortals to figure out that there will be a lot of races to conduct in both the morning and afternoon sessions on the Saturday and time is everything. One crew stuffing around for I minute just moving into the water turns into an hour if repeated over 60 races. Those minutes are vital. Crews will be expected to be ready to race when the check starter calls them in.

Referee Geoff Lyons and his team Ron Pommering, and Whippy are aware of the time constraints and, although fair men, will warn you at the sweeps meetings that time wasting will not be tolerated and crews could face a DQ at the start. The marshals will also be briefed, we have very experienced marshals who will liaise with the starters/referee/check starters of looming problems (turn arounds etc.) So please be aware of your responsibilities.

President Bert Hunt reminds all crews that the ASRL Open is the Pride of the Navy National Series and that Navy gear MUST be worn in every race. For late starters, Navy gear will be available from the Broulee clubhouse from Friday.

For logistical & administrative purposes, these crew entries and areas may be subject to change up until Friday of the event.  If you notice any errors or ommissions with your Club's entries, please notify Zom Knox as soon as possible via zom46@bigpond.com or 0402 139 844


*Total number of crews in the last column does not include Masters crews.
Could Masters crews please contact Zom (zom46@bigpond.com or 0402 139 844) to advise age group entering.