Some tips to keep you in shape

All Very Well and Good - a complimentary Health and Fitness Newsletter provided courtesy of:

Let’s start Part 2 with the thought that you must be able to gain the respect from all members in the crew to have any chance of success and most importantly enjoyment:

It is always interesting to stand on the beach and watch both the learning and experienced sweep at work. A good tip is to watch someone that is experienced, has good crew respect, keeps his crew safe and has good surf skills. If you’re going to learn from anybody it may as well be from a sweep that knows their stuff.
The very first thing to learn and understand is your stance position in the boat. If you watch a carnival near you, you will see two distinct stance styles.

We won’t be too judgemental here because like rowing there is no one right way. However as a general rule the sweep standing at 45 deg has a lot more options.

This is Part 1 of a series of articles on the skill and requirements to become or improve your sweeping skill and knowledge.

Like all things it isn't the only way but it is hopefully a good start in understanding the full package. In following articles different topics will be covered so in total we are going to look at the overview of the role through to general sweeping, crew safety, specific skills, strength, training and competition. Inappropriate technique in rowing can lead to injury and pain within the low back. Fatigued states of the erector muscles of the spine can be a contributing factor to increases in flexion and extension movements of the lower back, as these muscles help regulate the bending motion of the spine. Studies have found that within these fatigued states, the muscles allow the lower back to move through a large range of motion. During rowing movements, particularly during the drive phase, the spine almost reaches full flexion. It has been shown that this loss of lumbo-­‐pelvic control through flexion movements can result in injury as the same amount of force is produced in the spine when injury occurs while lifting. Furthermore, the stress placed upon the spine rises as flexion increases and approaches end range.

Later research in spine mechanics showed that rather than stopping flexion moments in the spine, the erectors (i.e. Longissimus, iliocostalis and multifidus) are more responsible for reducing anterior shear (or forward sliding) forces, by producing posterior (backward) forces. Not only will fatigue reduce the effectiveness of these muscles, but as flexion increases, the stimulation of stretch receptors within these muscles will cause an inhibitory reflex, further decreasing active control.

It has been shown that repetitive motion of the spine under load leads to soft and hard tissue injury (e.g. disc herniation's, ligamentous sprain and vertebral fracture). It has also been found that a full flexion of the spine has substantially compromised its ability to withstand compressive loads. When we consider these factors in conjunction with our knowledge of the fatigued states of lower spinal muscles, we can see that the potential for injury within the lower back is quite large.

Get the Most Out of Your Interval Training 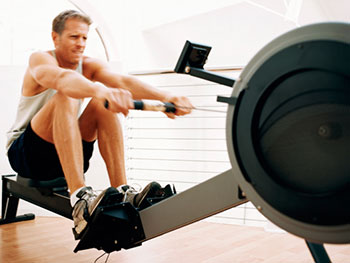 Interval training is the use of high intensity exercise interspersed with periods of active or passive recovery or rest.

The use of interval training has become a more prominent form of training because of the increased time to fatigue. But how do you set intervals? Intervals can be prescribed specifically to meet your needs and goals. This can be done by performing a simple fitness test; a set distance, time trial or a set time run (cycle, swim etc.) and using the results to calculate Max Aerobic Speed (MAS).

Max Aerobic Speed coincides with an individual's VO2MAX, which is their maximal amount of oxygen consumption used to create energy molecules. The MAS provides a speed or velocity which elicits the persons VO2MAX.

Current research into interval exercise and training methods says that in order to get the greatest gains from training using this type of training, you should be working at 120% of your MAS, as that is the determined intensity where you exercise at levels above your VO2MAX for the greatest period of time before fatigue.